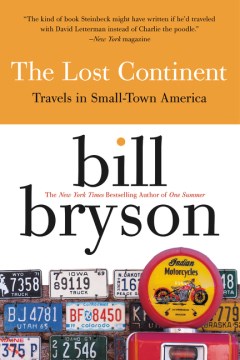 Literature with Lunch meets the last Thursday of the month at the Chestertown branch.  This group reads a mix of fiction and nonfiction and discussion is led by participants.  New attendees are always welcome.  Feel free to bring your lunch!

January's selection is The Lost Continent: Travels in Small-Town America by Bill Bryson (rated 3.8 stars out of 5 on GoodReads). "After ten years in England, Bryson returned to the land of his youth, and drove almost 14,000 miles in search of a mythical small town called Amalgam, the kind of trim and sunny place where the films of his youth were set. Instead, his search led him to Anywhere, USA; a lookalike strip of gas stations, motels and hamburger outlets populated by lookalike people with a penchant for synthetic fibres. Travelling around thirty-eight of the lower states - united only in their mind-numbingly dreary uniformity - he discovered a continent that was doubly lost; lost to itself because blighted by greed, pollution, mobile homes and television; lost to him because he had become a stranger in his own land. The Lost Continent is a classic of travel literature - hilariously, stomach-achingly funny, yet tinged with heartache - and the book that first staked Bill Bryson's claim as the most beloved writer of his generation." - GoodReads